Deli Sarkis:
The Scars
He Carried

A Daughter Confronts The Armenian Genocide and Tells Her Father's Story 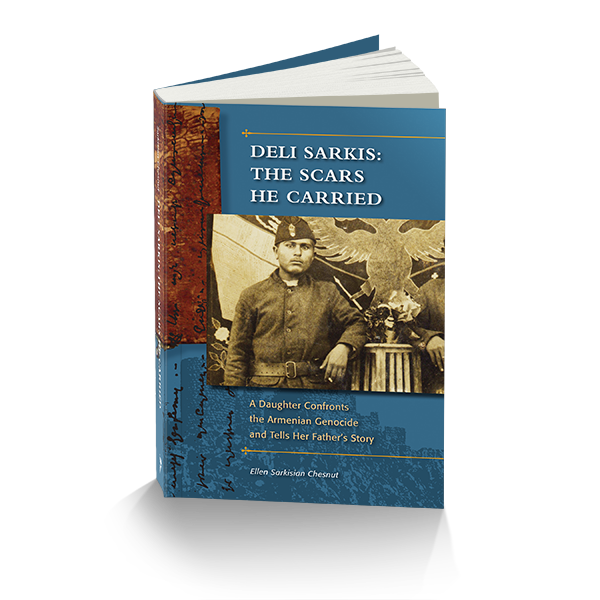 In writing the story of her father, “Deli Sarkis  The Scars He Carried,” Ellen Sarkisian Chesnut answers the question, “What happened to the Armenians?” As a teenager in San Francisco, Chesnut wanted to write a term paper on Armenian history. There was next to nothing in the libraries when she began her research. The Armenians, it seemed, were expunged from history.When Chesnut began talking to her father about his life and experiences, she had no idea what kind of an emotional journey she would take. He wanted to make sure that she recorded everything: from his bucolic childhood in the village of Keramet, in the Southern Marmara region of Turkey, to the devastating landscapes of Syria and Iraq where the human caravans of Armenians were sent to die in 1915-1916; to the fiery and unspeakably cruel inferno that was once the beautiful city of Smyrna burned by Kemalist forces in 1922. These are just some of what he experienced in his life. Not all of his life experiences were tragic. Some were filled with unsurpassable joy and humor. They are all recounted in this book. Chesnut makes sure that the deportations and mass murder of the Armenians in the 1915-1923 period are revealed in all their inhumanity by an eyewitness, her father. There will be no doubt in the reader’s mind that what Deli Sarkis experienced was one of the worst genocides of the twentieth century. So thoroughly planned and carried out that one and a half million Armenians were annihilated in a very short period of time along with their 3,000 year history, language, and culture in Anatolia.

Standing in the center of this book is Deli Sarkis, a powerful personality: outspoken, charismatic, tough, vulnerable, sensitive, flawed, psychologically wounded, and a mezmerizing story teller. Through it all, he remains a memorable human being and someone worth reading about.